I haven’t used a primer like this before. I was amazed how it felt on the skin. It went from jelly to wet and went on smoothly. I enjoy using it. 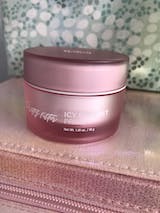 I have Oily acne prone skin and this icy sherbet primer is wonderful. A tiny bit goes a long way and it is refreshing feeling. It dries down quickly and it is smooth while being tacky to the touch (vs. slip/smooth silicone which does not work for my skin). Great gripping primer and seems to smooth my large pores and texture while feeling very weightless. Glad I bought 2!!

a
a.c.
LOVE THE FEELING

LOVE THIS WHEN I PURCHASED IT ITS VERY CALMING ABD COOLING AFFECT TO MY SKINA ND A LIGHTWEIGHT PRIMER, A MUST BUY AND TRY FOR EVERYONE. LOVE YOUR CLEAN BEAUTY PRODUCTS. XOXO

I'd been wanting to purchase this primer ever since I watched Cassie's (Thrift Thick) YT video review of it, but I'm not sure what to think of it just yet. The consistency is odd in a way that I like, but when I do put it on, it tends to pill up kinda? I can smooth down the pilled down spots on my skin and then it sort of dries out my skin I've noticed. I'm unfortunately not sure of my skin type right now and have been trying to figure that out lately; I used to have extremely oily skin (like Cassie's) last year before being prescribed spironolactone and tretinoin. I think I might have mildly dehydrated combo/normal skin now? If I do produce any oil, it's such a subtle amount only in my T-zone that I have a hard time distinguishing it from moisturizers...I guess for this review, we'll just say I have dry, flaky skin since that's been my "problem" since starting these medications. Underneath hydrating foundations and setting sprays, this primer still manages to suck all the moisture out of them along with my skin. It's not awful, but I think I was anticipating it being more hydrating. I'll continue using it because I want to like it and don't think it's terrible (and it's a pretty good value), but I think this was definitely made for oily skinned people - which is awesome as I was once one! - but not as much for dehydrated/dry skinned people.